There are currently 18 species of bat residing in Britain, 17 of which of which are known to breed here. They are extremely difficult to identify in the hand and even more so in flight.

All appear to be diminishing in numbers, probably due to habitat change and shortage of food, caused by pesticides, as insects are their sole diet.

As their diet consists solely of insects, bats hibernate during the winter when their food source is at its most scarce. They will spend the winter in hollow trees, caves, mines and the roofs of buildings.

Certain species, particularly the pipistrelle (the commonest and most widespread British bat) can quickly adapt to man-made structures and will readily use these to roost and to rear their young.

Bats are protected under Appendix II and III of the Bern Convention (1982), Schedule 5 and 6 of the Wildlife and Countryside Act (1981), Annex IV of the Habitats Directive (some species under Annex II), Annex II of the Conservation of Habitats and Species Regulations (2010) and EUROBATS agreement. Numerous species are also listed under section 41 of the Natural Environment and Rural Communities Act (2006) making them species of principal importance.

All bats and their roosts are therefore protected in the UK. This makes it an offence to kill, injure or take any bat, to interfere with any place used for shelter or protection, or to intentionally disturb any animal occupying such a place.

The UK has designated maternity and hibernacula areas as Special Areas of Conservation (SAC’s) under the Habitats Directive. Implementation of the UK Biodiversity Action Plan also includes action for a number bat species and the habitats which support them.

Where development proposals are likely to affect a bat roost site, a licence is required from Natural England. 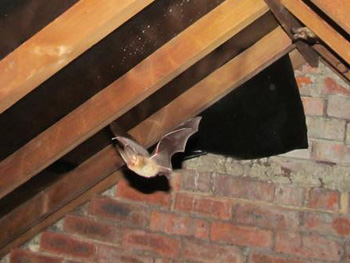