Once widespread throughout the country, hazel dormice declined in both population and distribution during the 20th Century; largely due to the loss of habitat. They now have a patchy distribution, primarily in southern England and Wales with some areas of reintroduction in the north of England and Scotland.

Dormice typically occur in diverse deciduous woodland, hedgerows and scrub. They are small mammals with a body size of around 6-9cm (plus tail 5-8cm), an orange/brown colour with white underbellies, black eyes, round ears and furry tails.

The dormouse is a nocturnal animal that is rarely caught and hence easy to overlook. They are highly arboreal, spending most of their time high off the ground, feeding along the branches of trees and shrubs and rarely travelling further than 70m from their nest.

Nests may be created in bushes and shrubs; however, more robust resting places such as hollow tree branches, squirrel dreys and old birds’ nests are preferred; with nests also found in bat boxes and bird nest boxes.

For around a third of the year, dormice hibernate on or under the ground from October until March/April. They are therefore, highly sensitive to any disturbance to the ground throughout the winter and spring.

It is virtually impossible to prove that dormice are absent and the only certain way to determine their presence is by surveying. This can be done by using traps and baiting points; although, the best way to establish presence is to look for feeding remains (such as gnawed hazel nuts). The erection of nest boxes or nest tubes will also reveal the presence of dormice; however, they are unlikely to be used immediately.

Dormice are protected under Appendix III of the BERN Convention (1982), Schedule 5 and 6 of the Wildlife and Countryside Act (1981), Annex IV of the Habitats Directive and are listed under section 41 of the Natural Environment and Rural Communities Act (2006) making them a species of principal importance.

This makes it an offence to kill, injure or take any hazel dormouse, to interfere with any place used for shelter or protection, or to intentionally disturb any animal occupying such a place. 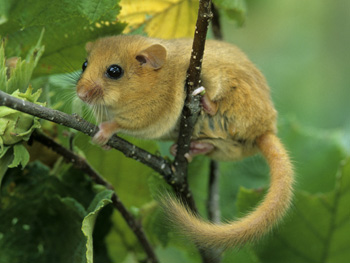