There are five main species of reptile that reside in the UK; common or viviparous lizard (Lacerta vivipara); sand lizard (Lacerta agilis); slow worm (Anguis fragilis); grass snake (Natrix natrix) and adder (Vipera berus). The adder is the only native species that is venomous although this is rarely harmful to humans.

Reptiles occupy a wide range of habitats including woodland, marshes, heathland, moors, sand dunes, hedgerows and bogs. Sand lizards are confined to moorland and coastal sand dunes where they lay their eggs in the warm sand. The range of the sand lizard in the UK is therefore very limited. Slow worms can be found in a wide variety of habitats throughout Britain and is the most likely reptile to be found in urban and suburban environments.

Maintaining the right body temperature is vital to reptiles' survival. In the morning, they find a warm basking site to heat up their bodies, then later they may move back into the shade because they do not sweat and have to be careful not to overheat. During hot summers, adders will try to move to damper, cooler sites.

Over winter reptiles will hibernate in burrows or under longs where they are protected from the cold and predators, emerging from February onwards as the weather warms up.

Reptiles are protected under Appendix II (sand lizards) and Appendix III (common lizard, slow worms, smooth snake, grass snake and adders) of the BERN Convention (1982), partially protected under Schedule 5 of the Wildlife and Countryside Act (1981), Annex IV of the Habitats Directive and are all listed under section 41 of the Natural Environment and Communities Act (2006) making them a species of principal importance.

This makes it an offence to disturb any reptile while it is occupying a structure or place it uses for shelter or protection or to obstruct access to such a place. 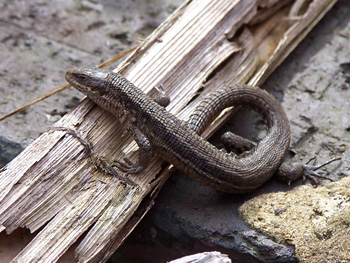