The Government has acknowledged the problems that can be caused by non-native invasive species. In 2008 the Government launched “The Invasive Non-Native Species Framework Strategy for Great Britain”. The strategy provides a framework for a more co-ordinated approach to invasive species management. It seeks to create a stronger sense of shared responsibility across government, key orgainisations, land managers and the public.

The Non-Native Species Secretariat has been established to oversee the implementation of the strategy. Details of the secretariat including risk assessments and action plans for some species are available at www.nonnativespecies.org

In general, there are four basic methods of controlling weeds; mechanical, chemical, natural and environmental.

Invasive species listed under Schedule 9 are prohibited from release into the wild. Schedule 9, Section 14(2) prohibits ‘planting’ or ‘causing to grow’ in the wild of any plant listed in Part 2 of Schedule 9.

The following is a list of all the species of plant listed under Schedule 9 of The Wildlife and Countryside Act 1981. 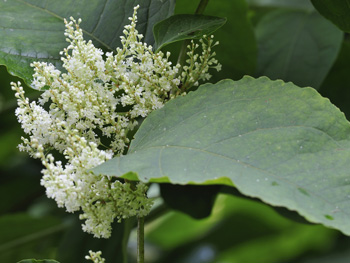