Great crested newts breed in ponds and other water bodies. They can begin to migrate to their breeding ponds as early as the first frost-free days in late January with the majority reaching their breeding ponds by mid-March. Timing will be influenced by several factors, primarily evening temperatures above 5oC and rainfall.

The peak egg-laying period is from mid-March to mid-May. The newts will lay their eggs individually, mainly on the leaves of submerged plants. The larva hatch after three weeks and then take another 2-3 months to complete larval development. Adult newts generally leave their breeding ponds from late May onwards.

Once the larvae have completed metamorphosis (the transition from aquatic larvae, efts, to land-adapted juveniles), they emerge from the pond. This emergence begins in late August and generally continues until late October. It takes 2-4 years to reach sexual maturity, during which time the newts will be land based.

Adults and immature newts spend the winter in places that afford protection from frost and flooding. This will generally be underground amongst tree roots, in mammal burrows, or under suitable refuges above ground like deadwood or rubble piles. Hibernation may last from October to February.

Whilst on land, outside the hibernation period, great crested newts will forage at night, taking a wide range of invertebrate prey.

Great crested newts therefore spend the majority of their time on land and only visit the ponds for breeding purposes.

Great crested newts will travel large distances between ponds and terrestrial refuges. It is recommended that anywhere within 500m of a pond should be treated as potential great crested newt habitat.

Great Crested Newts are protected under Appendix II of the BERN Convention (1982), Schedule 5 of the Wildlife and Countryside Act (1981), Annex II and IV of the Habitats Directive, Annex II of the Conservation and Wildlife Regulations (2010) and are listed under section 41 of the Natural Environment and Communities Act (2006) making them a species of principal importance.

This makes it an offence to kill, injure or take any great crested newt, to interfere with any place used for shelter or protection, or to intentionally disturb any animal occupying such a place.

If great crested newts are to be effected by any development, a thorough assessment of the population is essential followed by the design of a comprehensive mitigation package. Only when this has been done can a license application be submitted to Natural England for approval. It takes 30 working days for a license application to be determined and the period that mitigation measures take can be measured in months. It is therefore essential to plan well in advance of development commencing. 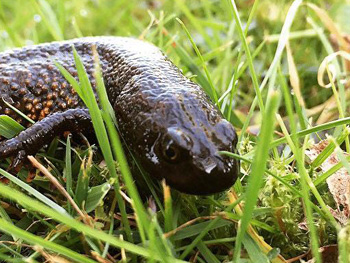