Crayfish are the largest and most mobile freshwater invertebrate. The White Clawed Crayfish (Austropotamobius pallipes) is the only native crayfish and this is protected under European and UK legislation.

White Clawed Crayfish are generally found in areas with relatively hard, mineral rich waters on calcareous and rapidly weathering rocks. They can be found in a wide variety of environments including canals, streams, rivers, lakes reservoirs and water-filled quarries.

White Clawed Crayfish are typically found in water between 0.75 to 1.25m deep but can occur in very shallow streams with as little water as 50mm and in deeper, slow flowing rivers. They are typically found under rocks and submerged logs, among tree roots and in river-banks. White Clawed Crayfish are omnivorous but primarily carnivorous eating macro invertebrates and carrion when available. They will also eat worms, insect larvae, snails, small fish, macrophytes, algae and calcified plants.

Crayfish can live for up to ten years and generally reach sexual maturity after three to four years. Breeding takes place between September and November when the water temperature drops consistently to below ten degrees centigrade. Over winter females will hold a clutch of eggs (between twenty and one hundred and twenty) beneath their tail. The juveniles are released from the mother from June in the south to August in the north.

The main threat to the indigenous White Clawed Crayfish is the spread of introduced non-indigenous species, particularly the larger, faster growing and aggressive North American Signal Crayfish (Pacifastacus leniusculus). They are also vulnerable to disease, particularly porcelain disease and crayfish plague, and the latter carried by the signal crayfish.

As a result, White Clawed Crayfish are endangered across most of its range and has been given protection under both European and UK legislation.

White Clawed Crayfish are protected under Appendix III of the BERN Convention (1982), Schedule 5 of the Wildlife and Countryside Act (1981), Annex II and V of the Habitats Directive, Annex II of the Conservation of Habitats and Species Regulations (2010) and are listed under Section 41 of the Natural Environment and Rural Communities Act (2006) making them a species of principal importance. White Clawed Crayfish are considered to be Endangered by the IUCN red list.

This makes it an offence to kill, injure or take any white clawed crayfish, to interfere with any place used for shelter or protection, or to intentionally disturb any animal occupying such a place.

It is an offence to release or allow to escape any crayfish species which is not ordinarily resident in the UK, or is listed on Schedule 9 of the Wildlife and Countryside Act (1981). These include North American Signal Crayfish, Noble Crayfish and Turkish Crayfish.

Licenses are available from Natural England to allow the taking of White Clawed Crayfish for certain specified purposes, including scientific or educational purposes and for conservation purposes.

A Natural England Conservation License is required for the purpose of conserving White Clawed Crayfish or introducing them to particular areas. 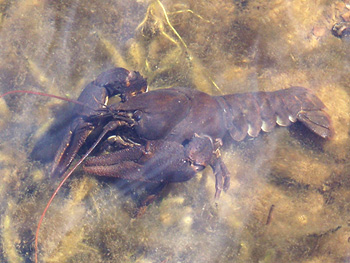