The water vole is the largest of the British voles. It lives in a series of holes or burrows at the waters edge and can be found along the banks of ditches, streams, rivers, lakes and canals. Although water voles live in colonies, the breeding females are territorial, each defining their contiguous territory with latrines during the breeding season. This lasts from March to October.

The water vole is herbivorous, feeding primarily on the lush aerial stems and leaves of waterside plants growing alongside the watercourse. Its activity is normally confined to the area within two metres of the watercourse. Bankside vegetation in this area is not only essential for food but also for cover from predators.

The water vole population has been on the decline in recent years. This is partly due to loss of suitable riverside habitats but also due to the increasing population of predators, particularly the escaped American Mink. Population decline has been dramatic and has accelerated over the last seven years. Surveys carried out by the Vincent Wildlife Trust show a loss of 67% of occupied sites and of 88% of the remaining population in the last seven years.

Water voles are protected under Schedule 5 of the Wildlife and Countryside Act (1981) and are listed under section 41 of the Natural Environment and Communities Act (2006) making them a species of principal importance.

This makes it an offence to kill, injure or take any water vole, to interfere with any place used for shelter or protection, or to intentionally disturb any animal occupying such a place. 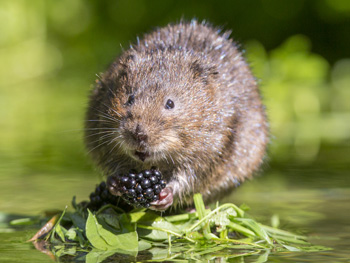