There are abundant bird species in the UK with some being resident all year round and others being winter or summer migrants that are present in the UK during specific seasons.

Birds utilise habitats in different ways with most habitats having a bird species that specialises in their use for either foraging or nesting.

The nesting season will vary according to the weather each year but generally commences in April, peaks during May and June and continues until August. It is also worth remembering that some birds nest in trees and scrub but others are ground nesting or prefer man-made structures or buildings.

Bird species are covered by varying levels of legislation with some birds, such as Barn Owls, Little Ringed Plover and Peregrine (among others), being afforded specific protection under Schedule 1 of The Wildlife and Countryside Act 1981. Other bird species are split into ‘Red’, ‘Amber’ and ‘Green’ lists depending on their conservation concern.

All nesting birds are protected under The Wildlife and Countryside Act 1981.

Part 1.-(5) of the Act states that:- If any person intentionally:- disturbs any wild bird included in Schedule 1 while it is building a nest or is in, on, or near a nest containing eggs or young; or disturbs young of such a bird,he shall be guilty of an offence and liable to a special penalty.

The Countryside and Rights of Way Act 2000 amends the above by inserting after “intentionally” the words “or recklessly”. 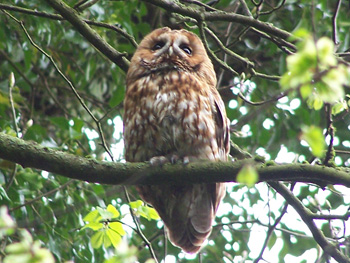